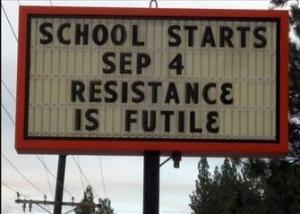 They say that this is the “most wonderful time of the year”.  No, I’m not talking about Christmas, I’m referring to Back to School.  Is this true for all parents?  Is the school year a blessing or a source of stress?

I have many friends who absolutely love September.  Their children go back to school and they are left with more free time – time to work, time to relax and time to clean.  I, on the other hand, am not one of those thankful people.  There, I’ve said it!  Wow that feels good!  Yes friends, I am not a fan of sending my Son to school.  Now don’t get me wrong, I love his school, I adore his teachers and opening his book bag after school is like a mini Christmas!  However the number of things I have to stress about has gone up exponentially.  Where do I begin?  Bullies, bad influences, head lice, colds, pink eye…and the list goes on.

When my children are with me I can control where we go, who they are in contact with and monitor their hand washing skills.  During the summer months, nobody got sick.  When my Son, Jack goes to school, all of that control goes out the window.  Despite a “keep your kids home when they’re sick” rule, some parents will try and send their children to school in hopes that their symptoms are overlooked.  That short amount of time in school is enough to spread plenty of germs which will infect other children.  Although I ensure my kids practice good hygiene at home, at school there are so many distractions and Jack may forget to wash his hands on a regular basis.  Tomorrow is the beginning of the third week of school and already, my whole family has gotten sick!

Last year, when Jack was in Kindergarten, there were several instances where a boy thought it would be funny to turn off the bathroom lights while Jack was using the potty.  My poor little man became very afraid in the dark (no windows) and understandably begins to cry and scream.  The vice principal finds him quickly, calms him down and promptly deals with the prankster.  I know, at that age, the boy’s actions were not considered bullying but it was enough to create doubt and insecurity in Jack’s mind.  “Why did the boy do that?”  “Why does he keep doing that?”  “I’m afraid to go potty in school.”  “I don’t want to be his friend anymore.”  I honestly didn’t think I would have to deal with such things in Kindergarten.

All I want is for my children to grow up safe.  When they are with me, they are as safe as they’re gonna get!  When they are in school, I am not in control of what happens and that stresses me to no end.  I’m hoping it will get easier as time goes on but according to my Mother, it doesn’t!