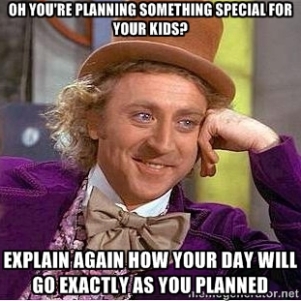 Like my little Wonka Meme?  I made it myself!!

Ok, I know you’ve all been there.  For one reason or another, you’ve decided to plan something really special for your little ones.  Perhaps it’s a vacation.  Perhaps it’s a trip to their favorite ice cream store.  The big day arrives and you have every little detail planned.  You’ve even envisioned the perfect pictures which will come of this special day.  The time arrives…and your little one(s) decide it’s the perfect day to melt down.

How about this, it’s the big day – Baptism, birthday, first day of school.  Your camera is ready, preparations have been made and you know exactly how this day will turn out.  Just as things get started, friends/family show up with plans of their own.

On any normal day I roll with the punches and adapt to what the day brings. There are some things in life you just can’t control, right? However when it’s supposed to be a special or a fun day, it’s really just a big kick in the pants when things don’t go as planned!

Allow me to share one of my woeful tales. Back in April, my Son had a day off of Kindergarten in the middle of the week. It was a scheduled break and I had the full day planned out. The weather was terrible so it was a great day to spend indoors. I was going to make a special pancake breakfast for the kids, followed by baking cookies. I had some fun snacks picked up and was going to treat them to an afternoon movie. That morning my kids woke up in very foul moods. Neither one of them wanted pancakes! When I said we were going to bake cookies they could not agree on the type we were going to make. I said we were going to make both of their favorites and even then they fought with me! After lunch was over they were so riled up that they eventually crashed hard. An afternoon movie was replaced by an afternoon nap. While the kids were napping I sat down on the couch and the only thought that entered my mind was “Really???”. If this had been yesterday the kids would’ve behaved perfectly fine. But no!!!! They had to pick a fun filled day to act up. Oh well, whaddaya do?

Good days gone wrong really used to bother me quite a bit. A part of me would actually feel insulted that my good intentions were met with bad behavior or other people who wanted the day to go differently. Now that I’m a tiny bit wiser, I know that things are bound to happen and if you go into your day with no expectations at all, you can’t be let down! Don’t paint the perfect day before it happens. Let the picture paint itself and I’ll bet you’ll be surprised by the results.