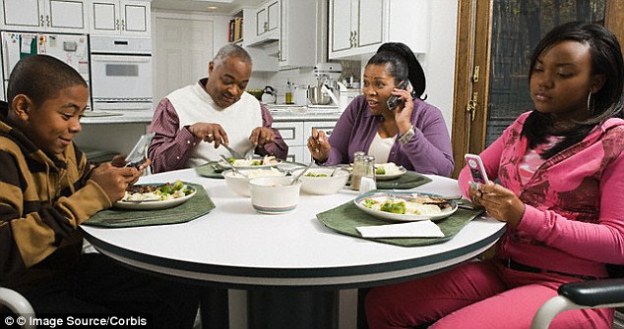 Yesterday evening, after putting my two children to bed, I happened across a moving video and I would like to share it with you (in case you haven’t seen it already).  The video is called “Look Up” and you can view it by clicking right HERE.  Don’t worry, it will open up in a new window!  Go ahead, check it out now (but come back!!).

In case you haven’t seen the video yet or plan on watching it later, this video was created by Gary Turk.  As of today, since being posted on April 25th, the video has 17,117,289 views and counting.  In this approximately five minute feature, Gary speaks about the downsides of cell phones and social media.  He tells the story as if it’s a poem and truly…it hit home.

Do these things happen all of the time?  Definitely not.  However I really want to make an effort to ensure that these instances don’t turn into bad habits.  After watching the video last night, I went to bed and thought about what I had watched.  I silently promised myself to put the phone away while my children were up during the day…to look up.  Today that promise was kept (easily I might add!) but in looking up, I really got to see what this video is saying.

While at swimming lessons tonight, I took notice of how many parents were actually watching their kids.  Not counting myself, of the nine parents on deck, only two were paying attention to their children.  Everyone else were engrossed in their cell phones.  I could hardly believe it!  I remember when I was young, my Mother had me in swimming lessons and I was constantly glancing at her to make sure she was watching my awesome swimming techniques.  I felt bad as I watched several kids try and get their Mom or Dad’s attention to show off a dive or something…but nobody looked up.

The video goes on to say that social media is making people unsocial…that cell phones are turning people into robots.  Do I necessarily agree with this?  No.  I enjoy social media!  Facebook (while annoying at times!) is a wonderful platform for keeping in touch with family and friends who live away.  However, do people need to check Facebook every half hour to see what their friends are up to?  Most definitely not.  That’s borderline crazy!  As for me, after the kids are in bed I don’t mind logging on for a bit to catch up with some of the people in my life.

As for cell phones, I have a motto I use with my kids – Phones are tools, not toys.  I don’t allow my children access to my phone.  Some parents do, and that’s fine for them.  I don’t judge people.  I believe cell/smart phones are wonderful tools.  One of the most important thing my phone does is allow my Husband to be a part of my children’s lives when he’s away at work.  My Hubby works away for months at a time and he misses so many things – birthdays, holidays, etc.  With the help of our iPhones, he’s able to see some of these things.  Though away at work, Hubby was able to watch as our Son was initiated into Beavers.  It meant a lot to them both.

As a Mom, my iPhone has many apps which make my life a little easier.  It carries my grocery/shopping lists, it helps to play music in my vehicle during long road trips and it also gives me great new healthy meal options to try.  Like I said, a wonderful tool.  However that doesn’t mean I have to hold it in my hand constantly.

Don’t make the mistake of missing out on life.  Don’t let your kids miss out on life.  Put the phones down and put the computers away!  Don’t just “like” life, get out there and LOVE it!